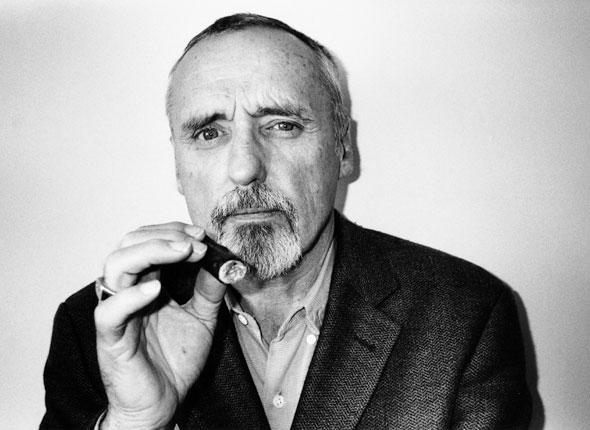 What I like about Dennis Hopper is his vision and his passion regarding art.

This guy became the centre of the art universe during the sixties in Los Angeles. He knew everybody, actors, singers, painters, models.

He helped to develop the movement of Abstract Expressionism and became close friends with many painters like Andy Warhol, Ed Ruscha, Roy Lichtenstein and David Hockney.

He was also a good actor and became a close friend of James Dean (one of my favorite actors) on the set of Rebel Without a Cause. That’s where he learned a new way of acting – completely natural and not academic (like most of the actors at this time).

He directed his first movie “Easy Rider” in 1969, a road movie about two hippy bikers riding through the roads of America with the New Orleans Carnaval as the final destination. It was the first film about the hippy generation : it became a classic.

This book is full of photographs that Dennis took during the sixties, beautiful pictures in black and white and many testimonies from his friends and moments of his life.

What influenced me about Hopper is his capacity to perform as an actor, a photographer and a director. I love his photographs, the contrast in them, the spots and the scenes captured are just perfect, always taken at just the right moment. Some of my favorites are the ones taken in Alabama during the Selma march, the images are so powerful, the tension is palpable as if we were right in amongst the crowds.

This function has been disabled for tonio bessa.